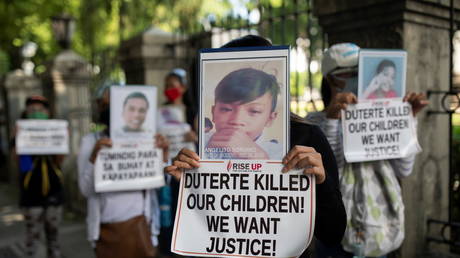 The International Criminal Court (ICC) has granted its prosecutor’s request to open an investigation, within the jurisdiction of the court, into alleged crimes committed in the Philippines during the ‘war on drugs’.

In a statement on Wednesday, the ICC’s pre-trial chamber granted its prosecutor permission to probe reported crimes in the Philippines between 2011 and 2019, allegedly committed under the country’s ‘war on drugs’ – a policy implemented by President Rodrigo Duterte’s administration.

The court’s statement notes there is a reasonable basis to undertake the probe, particularly concerning killings perpetrated throughout the Philippines between July 1, 2016, and March 16, 2019. “The so-called ‘war on drugs’ campaign cannot be seen as a legitimate law enforcement operation,” the statement reads, adding that the deaths cannot be seen as “legitimate nor as mere excesses in an otherwise legitimate operation.”

Also on rt.com
‘We do not need foreigners to investigate killings’: Philippines leader Duterte won’t cooperate with ICC killings probe

The ICC claims that available evidence suggests that it was a “widespread and systematic attack against the civilian population” which aimed only to further state policy.

While Manilla has long criticized the ICC and withdrew its membership from the court in 2018, the withdrawal did not come into effect until March 17, 2019. As such, the court’s investigation will examine alleged crimes that occurred on the territory during its membership, from 2011 to 2019.

In June, ICC Chief Prosecutor Fatou Bensouda said that a preliminary investigation into the killings had concluded and that there was a “reasonable basis to believe that the crime against humanity of murder has been committed” between July 1, 2016 – a day into Duterte’s presidency – and the day after the Philippines officially left the ICC in 2019.

Duterte and his government have dismissed the ICC’s authority on a number of occasions. After Bensouda’s remarks in June, the president’s spokesman, Harry Roque, said: “We do not need foreigners to investigate killings in the drug war because the legal system is working in the Philippines,” adding that the move was “legally erroneous” and was “politically motivated.”

Officially, Philippines security forces say they have killed 6,165 suspected drug dealers during operations. However, some human rights activists say the total is many times greater.