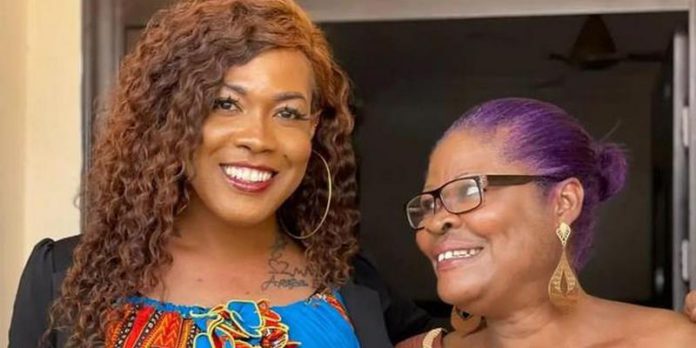 Mother of transgender music artiste, Araba Forson, has recounted how after she gave birth to her son, he was consistently perceived as a girl until he finally grew to become a transgender with the name Angel Maxine.

Originally born as Maxwell Okyere Opoku (Kwabena), Angel Maxine is now a fully groomed transgender, despite the presence of a penis between her legs.

Speaking with Benjamin Akakpo on the Prime Morning Show on Friday, Araba Forson recalled that immediately after putting to birth, the nurses and midwives at the hospital started referring to Kwabena as a girl. This was because Kwabena was chubby and possessed very delicate eyes and hair like that of a girl.

Recounting her experience on TV, she further indicated that the perception of her son as a girl did not end at the hospital. As a fashion designer, she disclosed that most of her clients who visited her shop and met her absence, later came back and asked about her ‘daughter’ she left behind.

According to her, when her customers made such remarks, she had to consistently explain to them that Kwabena was not a girl, despite her feminine physique and outlook.

She revealed that during weighing sessions at the hospital, the nurses also reacted in shock when they saw the baby with the name, “Maxwell Okyere Opoku”. Stunned by Maxwell’s striking feminine looks, the nurses took Maxwell around the hospital, admiring his beauty and inviting others to observe his unique looks.

Her mother, who also saw Kwabena as a girl, went ahead to buy pink dresses for her supposed ‘granddaughter’. In her narration to Benjamin Akakpo, these were some of the notable occasions where the world erroneously perceived her biological son as a girl-child, instead of the boy he was.

According to her, during the era of the public confusion about her son’s gender identity, the conversations about LGBTQ were not popular, hence everybody simply admired Kwabena’s beauty without giving thoughts to LGBTQ and its dynamics.

Her son, Maxwell Okyere Opoku, who now prefers to be known as ‘Angel Maxine’ is known on social media as a staunch LGBTQ advocate and a transgender songstress with her hit track, ‘Wo Fie’.

In her opinion, the LGBTQ community in Ghana should not be subjected to any form of ill treatment or discrimination because of their distinct sexual preferences. Maxine is, therefore, forcefully against the current bill in Parliament which seeks to criminalise LGBTQI+ in Ghana.