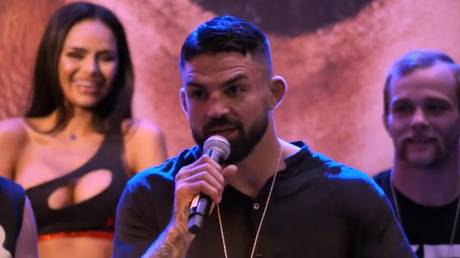 Former UFC slugger Mike Perry has caused controversy with claims that someone could get killed as he prepares for the unique new ‘Triad Combat’ event set for this weekend in Texas.

Organized as the latest combat sports venture by Triller Fight Club, Saturday’s event at the Globe Lite Field in Arlington will see professional MMA fighters and boxers face off in a specially designed triangular ring.

According to the promoters it will be “revolutionary, new combat team sport which incorporates boxing and MMA rules in an aggressive, fast-paced manner with the fighters competing in a specially designed triangular ring over two-minute rounds featuring professional boxers competing against professional mixed martial arts fighters.”

Competitors will wear crossover gloves and while only punches will be allowed, fighters will be able to strike from the clinch in an attempt to find an “even playing field” between the two combat sports.

Bouts will be broadcast by FITE on pay-per-view and the entertainment will include a concert from heavy metal giants Metallica.

Hyping his showdown at 175lbs with light heavyweight boxer Michael Seals, Perry raised eyebrows with some of his claims about how the contest could go down.

In an expletive-laden rant, Perry issued a threat that many felt crossed the line even via combat sports’ often dubious standards.

“Let’s go, for real, mother*ckers gonna bleed, motherf*ckers gonna get f*cked up, and somebody might die,” said the man known as ‘Platinum’.

After Perry was pulled up on his remarks, he carried on regardless.

“I don’t do all that talk,” said Seals in response.

Perhaps sensing that he might have upset a few people with his comments, Perry later took to Instagram to defend himself.

“You might not want to talk about death but it is apart of life,” said the 30-year-old, who has faced scrutiny for his run-ins with the law down the years.

“It’s the idea of being able to choose how you risk your lives that makes life so exciting. Some people are dead before they ever die. I’ve always lived life to the fullest.

Topping the bill, former UFC champ Frank Mir has said he will be earning more from his fight with Pulev than he ever did during his MMA days.

“If I hit my bonuses and I win, I’m basically touching on seven figures. And I’ve never been within a couple hundred grand of that in the MMA world,” said Mir.

The European Union on Tuesday said it wants China to release “verifiable proof” that Peng is safe and to conduct a thorough and transparent investigation into her sexual assault allegations against former Vice Premier Zhang Gaoli. One of China’s most recognizable sports stars, Peng publicly accused Zhang of coercing her into sex at his home, […]

ROME: A villa in the heart of Rome that features the only known ceiling painted by Caravaggio is being put up for auction by court order after the home was restored by its last occupants: a Texas-born princess and her late husband, a member of one of Rome’s aristocratic families. The Casino dell’Aurora, also known […]

Speaking to participants of an online investment forum. the Russian president said that NATO’s eastward expansion has threatened Moscow’s core security interests. He expressed concern that NATO could eventually use the Ukrainian territory to deploy missiles c…