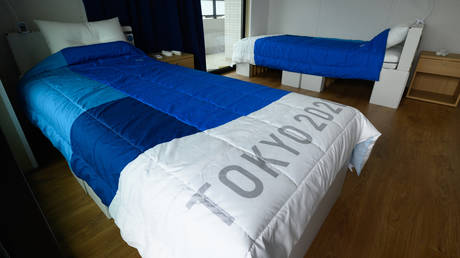 Olympic organizers in Tokyo have responded to complaints about a supposed lack of comfort at their accommodation, which one member of the Russian team is said to have likened to “medieval Japan.”

The delayed Games formally begin with the Opening Ceremony on Friday, but thousands of athletes and staff have already jetted into Tokyo to settle in at the Olympic Village.

That includes the Russian team – some of whom are reportedly disgruntled about aspects of their living quarters.

According to reports in Russia, there have been grumbles about the absence of TVs and refrigerators in some of the rooms and also a lack of toilets.

One member of the Russian team is said to have described the situation as “like medieval Japan.”

Those complaints were put to Olympic bosses at a press conference week, where Organizing Committee president Seiko Hashimoto responded.

“I understood that we have prepared everything for a comfortable place [for athletes],” Hashimoto is quoted as saying by Nikkan Sports.

“We want to be able to respond to [requests for] refrigerators and TVs as soon as possible. First of all, let’s check with the Russian team. We will take every possible response.”

Fellow senior Tokyo 2020 official Toshiro Muto added: “I’ve never heard a story like this before. We have a good system in place. There may be various opinions, but I would like to make use of them in the future.”

Organizers have reportedly said that the Russian team hadn’t requested the installation of paid TVs or fridges in their rooms.

The head of the Russian Olympic Committee (ROC), Stanislav Pozdnyakov, struck a diplomatic tone when he was quizzed on the issue.

“First of all from the ROC I’d like to say officially that we have a constructive relationship with the Local Organizing Committee,” said Pozdnyakov.

“Our building [in the Athletes’ Village] is in the first row from the sea and with a view of the bay, it’s one of the four buildings with the best location in the village…”

“Regarding technical questions, whenever anyone moves into a new home, there are always questions which come up. But when issues appeared, representatives from the organizers solved them within minutes, not hours,” Pozdnyakov added.

“The Olympic village is always built for the residents of the host country. It’s clear that there are certain features of the Japanese life, hygiene features.

“These features clearly demonstrate the architectural differences between European and Japanese apartments.

“Most athletes treat this adequately – with humor, irony, without any malice. Of course there are some drawbacks, but that was the first day. Already on the second day everyone feels great,” Pozdnyakov added, calling the overall organization “brilliant.”

Also on rt.com
Debonking the myth: Irish gymnast bounces on ‘anti-sex’ Olympic beds in Tokyo to show they ARE strong enough for athlete action

Accommodation features in Tokyo have become a talking point before the Games kick off. Rumors spread on social media that the specially-designed cardboard beds had been installed as an ‘anti-sex’ deterrent for athletes, who have been urged to maintain social distancing due to Covid fears.

However, those claims were debunked by organizers after an Irish gymnast proved how sturdy the beds actually are.

Russian athletes have also demonstrated the tight confines of the bathrooms in their accommodation.

Tennis star Karen Khachanov, who is 6ft 5in, showed the squeeze he will need to contend with when washing himself in a clip shared on social media.

The issues are reminiscent of the ‘Sochi Problems’ hashtag used during the 2014 Winter Games in Russia, where athletes and journalists (particularly in the West) pointed out supposed deficiencies in their Olympic accommodation.

Mo Africa News: Multiple explosions and gunfire could be heard in downtown Kabul as the residence of the country’s defense minister came under attack by suicide bombers. The minister and his family are reportedly safe, but there are casualties. A car bomb went off in the Shirpoor neighborhood of Kabul on Tuesday evening, around 8pm […]

Mo Africa News: SEOUL: North Korea is releasing emergency military rice reserves as its food shortage worsens, South Korea’s spy agency said on Tuesday, with a heat wave and drought reducing the country’s supply. The country’s moribund economy is continuously being battered by the protracted Covid-19 pandemic, and while mass starvation and social chaos have […]

Mo Africa News: England and Wales suffered a record high number of drug deaths in 2020 during the Covid-19 pandemic, following in the footsteps of Scotland and the United States, which experienced a similar rise. There were 4,561 deaths from drug poisoning last year – up 3.8% from 2019 and the highest number since records […]