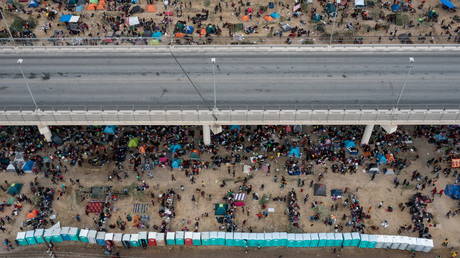 Donald Trump has released a statement blasting the Biden administration, this time over the crisis in Texas where thousands of migrants are being held under the Del Rio International Bridge.

In a Sunday statement, the former president blasted the “mainstream media” for “paying almost no attention” to the situation in Del Rio and predicted the border situation will become “the greatest crisis in the history of our country,” even oddly dubbing it a “crisis crisis.”

Illegal border crossings have surged under President Joe Biden, and reports of overwhelmed migrant facilities and, as well as catch-and-release processing tactics have made the situation a major point of criticism with his opponents.

According to projections released this week, there have been 1.85 million border apprehensions this year, breaking a record of 1.64 million in 2000.

“The largest number of illegal aliens in the history of our Country are pouring in by the millions. They are totally unchecked and unvetted, can do whatever they want, and go wherever they want,” Trump said, adding that “murderers, drug dealers, and criminals of all shapes and sizes” are part of this “massive migration” and, if released into the US, will continue the country’s rapid decline into a “cesspool of humanity.”

Biden has most recently faced scrutiny over images and videos being released from Del Rio, where a bridge has been reportedly used as a temporary holding area for over 14,000 migrants.

The US Department of Homeland Security (DHS) previously vowed to increase evacuation flights in response to outrage, though more than 12,000 remain at the bridge, as of Sunday.

NEW: U.S. Border Patrol Chief Raul Ortiz says there are currently 12,600 migrants under the bridge in Del Rio. Told me single adult men will be expelled via Title 42, but most family units will be processed and released into US w/ NTA (notice to appear). @FoxNewspic.twitter.com/JhaS3YB4pX

Law enforcement has told media on the ground that while single migrants will be removed, “family units” will be processed and released into the US with an NTA (notice to appear), a strategy many conservative activists have said is dangerous and unproductive.

Evacuation flights, however, are ongoing, according to Del Rio Mayor Bruno Lazano, who is one of numerous Texas officials to place blame for the crisis at the bridge on the president and his administration. The mayor did say on Sunday, however, that after pleading with the administration for help, he was given the chance to brief Secretary of Homeland Security Alejandro Mayorkas on the “dire situation.”

The European Union on Tuesday said it wants China to release “verifiable proof” that Peng is safe and to conduct a thorough and transparent investigation into her sexual assault allegations against former Vice Premier Zhang Gaoli. One of China’s most recognizable sports stars, Peng publicly accused Zhang of coercing her into sex at his home, […]

ROME: A villa in the heart of Rome that features the only known ceiling painted by Caravaggio is being put up for auction by court order after the home was restored by its last occupants: a Texas-born princess and her late husband, a member of one of Rome’s aristocratic families. The Casino dell’Aurora, also known […]

Speaking to participants of an online investment forum. the Russian president said that NATO’s eastward expansion has threatened Moscow’s core security interests. He expressed concern that NATO could eventually use the Ukrainian territory to deploy missiles c…